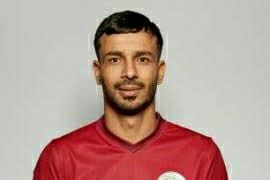 Boualem Khoukhi is a professional footballer who plays as a centre-back for Al Sadd in the Qatar Stars League. Born in Algeria, he represents the Qatar national team.

A pure product of the JSM Chéraga junior ranks, Khoukhi made his debut for the senior team in the 2009–10 season. He struggled in his first season, but his career was soon revived when Farid Zemiti was hired as the head coach of the club. He became integrated into the first team, playing alongside future Algeria international Islam Slimani, and many Algerian clubs were alleged to be interested in the services of Khoukhi, including USM El Harrach.

He soon received an offer from Al Shamal in Qatar, which he accepted. However, after landing in Qatar, Al Arabi head coach Uli Stielike believed Khoukhi had exceptional potential and offered him a trial at the club. He accepted the trial and was offered a contract deal shortly after.

On 5 September 2010, he started for Al Arabi in the final of the 2010 Sheikh Jassem Cup against Lekhwiya, with Al Arabi winning 1–0.

In July 2017, Khoukhi joined Al Sadd. In July 2019, Al-Gharafa announced signing him on a four-year deal but Al Sadd denied the transfer.

Khoukhi was called up for the first time to the Algeria under–23 national team for a pair of friendlies against Tunisia. The Qatar Football Association attempted to naturalize Khoukhi shortly after he arrived in Qatar, however, he refused and claimed that he would not be naturalized for any amount of money. He stated his desire was to play with the Algeria senior national team. Subsequently, he received Qatari citizenship in order to assist in his club's foreign player quota.

Despite his call up to Algeria's olympic team, he was called up to the Qatar B team on 13 November 2013 by compatriot Djamel Belmadi. When questioned about Khoukhi's call-up to the squad, Belmadi claimed that Khoukhi was naturalized prior to his call-up in order for his team, Al Arabi, to overcome the foreign player quota. Belmadi stated he was surprised when the QFA revealed Khoukhi was eligible to be called up to the Qatar national team. He made his official debut for the team on 25 December in the 2014 WAFF Championship in a 1–0 win against Palestine.