S 16. Diary of a Cop : A beautiful morning in the jungle! 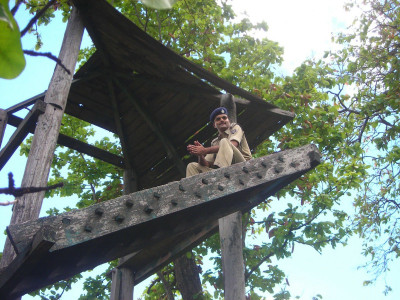 The next morning as I got up lazily around 8 a.m., it was still foggy and the Sun had still not taken full charge of the cold day. After breakfast at the range office we left for the watch tower.

As we got down from the vehicles near Manor river, I could see Kamaljit getting very excited. He had spotted tiger pug marks just where we got down and showed them to me. He also briefed me about the specialities of different pug marks and how one could even distinguish a female from a male tiger. As we started climbing the hill for reaching the watch tower, it could be seen that the track of the past had been damaged by the growth of wild vegetation. After some height, vestiges of the tower could be seen. We could hear sounds of several animals on the way and also noticed the marks left by wild boars and other species on the ground.

The fresh claw marks of a tiger could be seen on a tree as we reached the watch tower which had been left unrepaired for long. Promising as the view from the tower would have been, I decided to use some of my climbing skills to reach the top with some effort. I climbed every step very cautiously since the dilapidated wood which was quite mossy and slippery as well could not be fully trusted. But at last I reached the top and had a lovely view of the hilly ranges and the meandering river cutting sandy stretches between the dense forests. The fog around impeded a clear view of the distant ranges but nevertheless added to the overall charm of the view as I could see butterflies wading upon the bushy undergrowth nearby. I bid farewell to Kamaljit as I had to soon leave for Patna where I needed to officially hand over some documents along with the charge of my previous tenure.