S 15. Diary of a Cop : A beautiful & memorable night in Bagaha 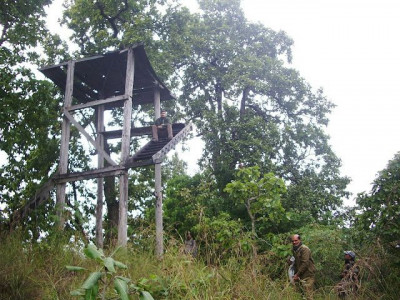 Delightful read. Thanks for sharing, sir.

As I sat and talked to the police station staff about the jurisdiction, it being my second visit, I saw someone from the forest department arrive with a message and learnt that Kamaljit was waiting for me at the Kotraha rest house.

After some time I left for Kotraha which was about 5 kms from the PS and met Kamaljit, who by then had already arranged for some snacks and tea and he welcomed me to sit near the old fireplace which had been sufficiently lighted up on the cold day.

As we chatted for about two hours, dinner was served, but our conversations about the forest and wildlife did not seem to end. Thus after dinner, he proposed me to accompany him to the Ganauli range office where he was then putting up and I happily agreed as there wasn’t much to do in Bagaha on the return after a bone shaky drive of more than 3 hours.

As we reached the Ganauli range office, another log fire was waiting for us below a guava tree, which was so welcoming that we sat beside it chatting for maybe more than three hours after which I decided to sleep for the night in the guest house itself. This night was one of my most memorable nights in Bagaha as I still remember the dew drops falling from the guava tree leaves as we talked on a variety of topics including accounts of the forests in British times and stories of Jim Corbett and others. As I planning to retire for the night, Kamaljit informed me about the presence of a British era wooden watch tower which had probably since never been repaired and was located in the near vicinity of the Manor river, at about 7 kms distance from Ganauli. We planned a visit to it for the next morning.