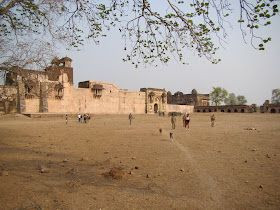 11. The story of Rohtasgarh : Structures within the Fort premises

15. The story of Rohtasgarh Fort : The theme of Sone Mahotsava

7. The story of Rohtasgarh Fort : Rohtas Fort under rule of Kharwar Dynasty

12. Silent Pages : The temple of Rohitsawa

13. Silent pages : The Police Initiative for promotion of tourism on the Rohtas Fort

14. The story of Rohtasgarh Fort : The Sone Ganga Vindhyachal zone

10. The story of Rohtasgarh : Structures within the fort

2. The story of Rohtasgarh Fort : The myths & stories surrounding the fort

4. A brief history of Rohtasgarh Fort

“Rohtas is a stronghold on the summit of a lofty mountain, difficult to access. It has a circumference of 14 kos and the land is cultivated. It contains many springs, has wherever the soil is excavated to the depth of three or four yards, water is visible. In the rainy season lakes are formed, and more than two hundred waterfalls gladden the eye and ear. The climate is remarkably healthy.”

“ Rohtas is picturesquely situated on an outlying spur of the Kaimur Hills, thirty miles from Dehri and 1490 feet above sea level. To the left of the spur winds the valley of the Son with low wooded hills on its opposite bank and a higher range in the distance.

To the right, the hills sweep round forming an immense and beautiful wooden amphitheatre about four miles deep, bounded with a continuation of  the escarpment; and at the foot of the crowned spur is the village of Akbarpur nestling in the midst of undulating hills.

The remains of the Fortress occupy a part of the plateau about four miles from east to west, and five miles from north to south, with a circumference of nearly twenty-eight miles. It is separated from the table land on the north by a deep and wide recess, called the Karivari Khoh, a branch of which, Galariya Khoh, also separates it from the table land to the west, leaving between its south end and the rock overhanging the Son a rocky peninsulaor neck, about two hundred yards wide, with perpendicular sides.

There are about eighty paths up the rock accessible to men, which were all more or less fortified, while strong defensive works were constructed at the four great ghats from which access to the summit was more easily obtained.