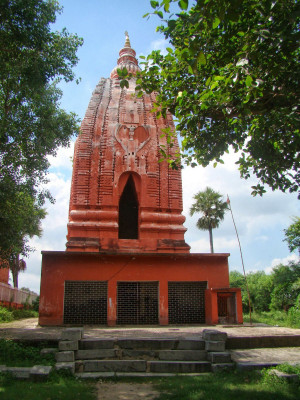 9. Silent Pages of Konch : The antiquity of the Temple

7. Silent Pages : Statues at the site

5. Silent Pages of Konch : The Sanctum Sanctorum at the Temple

2. Silent Pages of Konch : My visit to the town Konch

3. Silent Pages of Konch : It was a peculiar visit

Konch or ‘Koch’ is one of the few surviving ancient Hindu temples in Northern India. I had first seen a photograph taken of the temple by Peppe, while reading the ASI Reports of 1880-81.  Konch today is a small market place and a non-descript town in Gaya district of Bihar. Even today, it is one of the least known and visited sites. It is not popular as a tourist destination, even among the local population of Gaya district.  Recently, the area has been affected with Maoist activity, and a contingent of the Central Reserve Police Force (CRPF) has been placed to assist the local police. That the place is home to an ancient temple which was visited and described by Buchanan and other surveyors is sure to surprise even the residents of Koch, who seem to be totally unaware of the existence of a heritage structure nearby. The remains of Konch were first noticed and described by Buchanan during his survey of Gaya district.

During my stay in Gaya in October, 2013, I happened to visit Konch. From my reading of Buchanan and Cunningham, I had an idea of the location and existence of the temple there, but was not sure of its exact location. The temple was visible from the marketplace, but looked quite modern to the naked eye from a distance, due to the recent coat of paint. I had the Journal of Buchanan as my travel guide. At the time Buchanan had visited the Nagarjuni caves near Barabar Hills in Gaya on the 21st of November, 1811, he had the following remarks to make, which surprisingly seem to ring bells for the visitor even today.


“I however found at Nagarjuni a fine cave of which I perhaps might not have heard had I not gone to the place, for the people here are so stupid, and have so little curiosity, that you can scarcely find out any antiquity except by chance.”