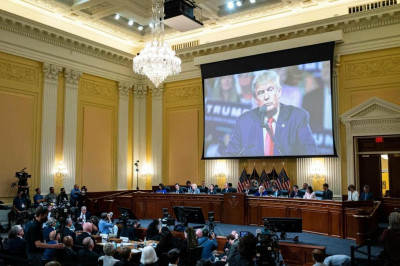 Donald Trump hounded the Justice Department to pursue his false election fraud claims, according to testimony Thursday to the House panel investigating the Capitol riot.

That included striving in vain to enlist top law enforcement officials in his bid to stay in power and hosting a dramatic Oval Office showdown in which he weighed replacing the agency’s leader with a more compliant lower-level official, the Jan. 6 panel heard.

Three Trump-era Justice Department officials recounted a relentless pressure campaign from the president, including day after day of directives to chase unsupported allegations that the election won by Democrat Joe Biden had been stolen.

The officials described the constant contact as a stark breach of protocol for a department that cherishes its independence from the White House but said they swatted away each demand because there was zero evidence of widespread voter fraud.

“For the department to insert itself into the political process this way, I think would have had grave consequences for the country that very well may have spiraled us into a constitutional crisis,” said Richard Donoghue, the acting No. 2 official in the final days of the Trump administration.

The president, he said, had this “arsenal of allegations. I went through them piece by piece to say, no, they were not true.”

Another witness, Jeffrey Rosen, who was acting attorney general, said he was called by Trump or met with him basically every day from the time he ascended to the post in late December 2020 through early January 2021, with the common theme being “dissatisfaction about what the Justice Department had done to investigate election fraud.”

It all added up to a “brazen attempt” to use the Justice Department for his own political gain, said Rep. Bennie Thompson, a Mississippi Democrat and co-chairman of the Jan. 6 committee.